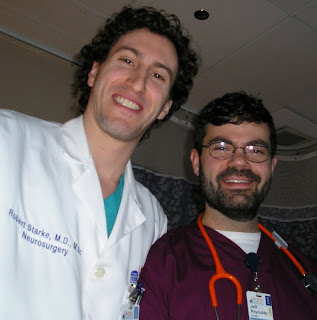 Okay Ladies, here I introduce Dr. Bobby Starke.  This guy spent 30 HOUR shifts in the NICU, resting on some cot in a back room whenever he had a moment.  He wore New Balance running shoes and his white coat, though a few times he came in dressed in scrubs.  It was Bobby Starke who witnessed my biggest seizure the day after my surgery (I think the day after).  I felt this huge electrical pulse in my left arm and my hand began to jump off of the bed.  It moved up into my neck and was so painful, these shocks and muscles clinching.  He got me a lovely injection of Ativan and then took it upon himself to try to stop the seizures by adding Dilantin injections to the Keppra I had been taking before the surgery (both anti-seizure meds).  He was so friendly and smart...and I mean, even his name: Bobby Starke.  Ethan & I still joke about him.

Beside him is one of the male nurses who took great care of me.  Jeff consoled me after each seizure (there were many more but only in my hand) and talked to me during some times I felt helpless and sad.  Ethan & I really liked this RN -- if someone had told me the male nurses were just as caring as the female ones I would not have believed it.  Though, no commodes or bedpans here, I always asked Jeff to call a female RN for that stuff! Embarrassing!

When I talked to Jeff about the kinds of folks in the NICU, he told me about mostly the aneurysm cases, who I had assumed were older people.  I had confessed to smoking clove cigarettes (have to tell everything before surgery you know) for the past year, about 2 or 3 a day, and he said: "Cathy, the aneurysm cases are usually women 30-50, who smoke."  In fact, someone younger than me had died the day of my surgery because Kendall (who I wish I had a photo of but didn't have the camera) had told me: "I'm closing you glass door so you can't hear all the sadness outside the unit."  It was a mother wailing.
Posted by Cathy at 12:17 AM