You're always on my mind...

I tried three times to get some home occupational therapy practice by typing with my weak left hand but it was infuriating.  My ring finger & pinky drag along the keyboard causing all sorts of problems.  I even published my half-sentence twice by accident (my wrist caused that).  I'll have to pick a different activity in a bit, like turning over playing cards or picking up the little plastic counting bears.

I tackled our pile of mail today, it's been growing steadily for 6 weeks & I have had to avert my eyes when near it.  (I don't see you nasty pile of mail! I don't!) Anyway, I nearly have all the bills in order.  It actually crossed my mind to use Excel (*gasp!* It IS useful Russ!) to track all the bills/payments and such from 1/24/10 and on...would that bore you to see my bills? Too bad! It's fascinating actually.  We'll see how much time it will take me.  I haven't gotten any bills yet from my most recent re-hospitalization, so it won't include everything.

Instead, I'll try to return to my calm and optimistic self by telling you briefly about last Thursday in Charlottesville.  The MRI was freaky again.  I didn't need a Valium like the first time but a blindfold helps.  I asked for 70s & 80s music & was not disappointed by the radio station piped in through headphones.  I mean, who doesn't love Steely Dan singing: You go back, Jack, & do it again/wheel turnin' round & round:

(I had to choose a lame homemade video because the others just didn't make the cut).  It's hard to stay completely still when I hear this because it has such a good beat, but while getting the MRI, if you're not still, they have to re-do it.  And then a song I never appreciated until now, "Jack & Diane" (recorded when he was just John Cougar): Hold on to 16/as long as you can/changes come 'round real soon/make us women & men:

Around 1983 I heard of Marilyn Monroe from Joe Elliott of Def Leppard talking about "Photograph" & that started a lifelong love for her.  It's funny how pop culture is inspired by past pop culture.  I've learned a lot just by being a fan.

When I was 12, Duran Duran got their picture taken by Andy Warhol & I was obsessed with him too.  I've always copied. 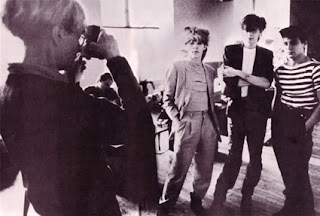 Then on to Warhol's temporary muse Edie, of course.   Young + Rich + Famous = dead by 27.  I had heard her name but it wasn't until hanging out in Monty Chowdury's basement in 9th or 10th grade I saw her.  Monty's sister Nina (or maybe it was Bella) had painted a huge wall-sized portrait.  I remember the CHS newspaper printing a picture of it too.  When you get older, you start to realize people you thought were cool & tragic just weren't that smart.  And they were also rather empty.  I'd never idolize Edie now, though she had charisma. 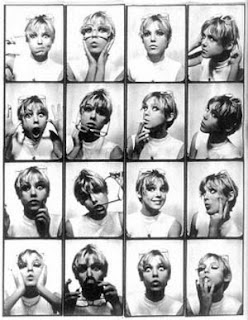 Sorry, all stuff that you don't need to know, I just had an 70s/80s moment.  I was more or less in journal-memory-mode instead of present-brain-blog mode.

I was thinking of a blog posting of my late classmate Ernie, who described the MRI chamber as "the loneliest place on Earth".  He got a lot of them, & I will be getting them regularly for a while; then hopefully once every 5 years.  Ernie was right in a lot of ways, it's a cocoon, but a very obnoxious & loud one, and you are there, alone with your thoughts and hopes for a scan showing good news.  You wait for the rescue-squad-siren-scan that vibrates the table you're on (kinda fun) and then the "Aliens" movie-alarm-scan, almost expecting to hear: "you now have two minutes to reach minimum safe distance".  Then they inject you with contrast dye, which you can feel travel throughout your whole body, head to fingertips to toes.  It's a warm wave, then gone.

But -- I have to say, the MRI office at the Fontaine Research Park in Charlottesville is busy.  There are so people many needing scans, I didn't feel so alone.  There was someone before me & after me, all going through the same experience.  That doesn't mean Ernie wasn't right, because it is just you for nearly an hour in that small space, or that I'm not dreading my next one in 6 months.  (I think Ernie would appreciate my 80s segue by the way.)  After the MRI I told Ethan: "all I need is for Dr. Shaffrey to say my head is normal, & I think I'll make it through today".  I had just been discharged from Lynchburg General the night before & still feeling worried and stressed.

I need to wrap this up.  After the MRI we saw Dr. Shaffrey at the UVA Neurosurgery Clinic, and he went over the scans.  Before & After.  I wish I had the scans to post here but the Medical Records Dept didn't have my new ones yet.  My scans looked great.  My brain has already made itself comfy by stretching out and filling the space where the tumor was.  My head looks normal.  Dr. Shaffrey was very happy and quite pleased with the results.  He was almost surprised to find nothing wrong.  He said he had to admit, it had turned out well.  Ethan said: "Dr. Shaffrey, you know it's okay to toot your own horn" and the doc said: "that thing was enormous, no one in their 30s should have that in their head!", I'm very happy with the way it turned out." I said: "If you're happy Dr. Shaffrey, then I am happy!"
Posted by Cathy at 3:08 PM