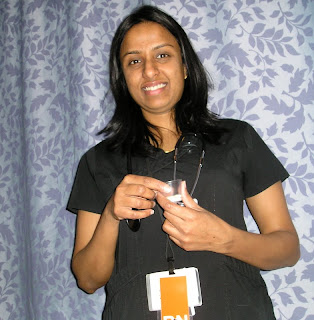 Just a few more pictures before I'm done.  Sheeba was my most magical nurse.  She came in with this lovely British-Indian accent and immediately started calling me "dear".  After a bad night with a younger RN who told me she "Facebooked" all the time (and even showed me her pink Blackberry or whatever) and took 25 minutes to bring me water, Sheeba was the one who left me feeling like someone was actually there for me if I needed to hit the call button (this is very important, especially if you gotta pee).  After giving me an injection of Decadron, which is nearly as painful as the Dilantin going in, she noticed that my newest i.v. was looking very bad, and my arm was getting pink.  She said in her beautiful accent: "Hmmmm, I do not like this at all my dear, not. at. all.  I'm taking this out and putting in a call to the i.v. team.  We will get you fixed up my dear, don't worry."  She knew exactly how the Dilantin felt going in and related to me her own health history, which I should keep private here on the blog.  She did confess she refused the Heparin shots because she hated needles so much (I got 2 shots everyday in the belly to prevent bloodclots, and daily insulin shots in the belly because of the Decadon injections, which basically make you diabetic.  (Blood sugar record one night: 349!) I couldn't believe she was a nurse and refused needles! I guess you just never know.

The i.v. team arrived around 1am, and at that hour, if you can't sleep, company is welcome.  My roommate had left and no one had taken her place.  Susan Hay was a lot different than the i.v. team lady with the huge implants.  She looked a bit like Jackie from "Roseanne" and had intense wide brown eyes.  At first she had no idea how to find a vein, they were so used up.  I mean, it's been 2 weeks and I am still bruised up like a junkie.  She worked on the back of my right arm, slowly tapping it in, and it took some time.  I told her my story and she told me her daughter had recently been diagnosed with bone cancer and it had metastisized.  Her daughter had started chemo but was very scared and maybe taking a little too much Ativan (for nausea) to cope mentally.  I would have been too.  I told her I was sorry, she left, and I cried for a long time.
Posted by Cathy at 10:23 PM