All I need: Water, laptop, beanie (and maybe some muscle tone!) 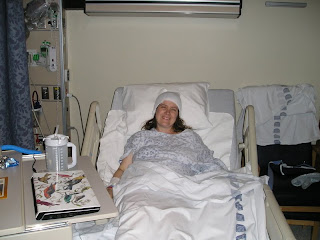 I spent 5 nights in the NICU, which wasn't totally planned.  I think they thought three nights because of the embolization, the surgery, and then observing the left-hand seizures and getting the meds right to stop them.  The last 2 nights I was simply there because there were no available beds in the "step-down unit", or, regular ICU.  (All I could hear being stuck in the NICU 2 extra nights were the sounds cha-ching! Cha-ching! CHA-CHING! But I'll get to that later.)  I loved the attention of the NICU compared to the ICU, but I also knew I was taking up a spot someone else probably needed.
When I finally got moved to the ICU, I was sad to see the NICU doors close behind me.  What a great unit and what should I do, send a card to thank them? Get in the way and try to visit? Maybe write a letter to the staff? Let it be?
I got wheeled across the hall to a shared room (it was inevitable), and set up.  My neighbors were Don & Gayl from Front Royal.  He was spending the night with her on a cot in the room and at her beck and call.  She had had three surgeries in 14 months.  The first on her spine, and when she woke up couldn't move her left leg.  During the second, some doctor put a bunch of hardware in her leg but she still needed a cane.  She was ready for some relief and had filled out a special request asking Dr. John Jane (semi-retired, totally famous UVA surgeon) to look at her case.  He had accepted her and done the surgery, taken out all the hardware, and now she could walk unassisted.  They were very friendly and we traded health stories.  She had a laptop and would play Mafia Wars on Facebook.  She was in pain though and always asking for Vicodin, her surgery was far different than mine and she could not lie on her back for 24 hours right after wards.  I was lucky, I mean, 2 nights after my surgery all I needed was Tylenol.  There are no nerves in your skull.
They did have their t.v. on the whole time, but luckily it was Animal Planet or something not too bombastic.  Don was the sweetest and would go back and forth getting whatever she needed -- so dedicated.  They convinced the docs she could leave, maybe a day too early, but she was ready to get the heck out of there, with a hefty script of Vicodin to boot.  I kind of wished I had been in more pain so I could score some narcotics, but it was obvious to the nurses and docs I was fine.  :)
Posted by Cathy at 11:46 AM